My first piece (a 3D pumpkin - see First Inspiration post ) was done in October 2014... I didn't really tangle anything else until April 2015, when I bought a sketchbook and some pens on a whim as I remembered how much I enjoyed completing the pumpkin...  After playing, I felt like I was missing something and decided I needed a few formal lessons, searched and found a CZT, and began classes the end of May, and was HOOKED!  So I have been tangling consistently about two months...

Reflecting on my learning, I realize I am beginning to develop a "style".  For instance, as long as I've been doing any kind of craft/needle work, I've always had a "signature" - my initials with slightly curved lines and overlapping.  Then several weeks ago I started signing the date a specific way - like a fraction with the month as the numerator and the year as the denominator.  I saw someone else had written the date this way and adopted it.  I don't always "sign" in the lower right corner either...  Now, it is what I call the outline string - the line that borders the tile.  Sometimes I use a line, sometimes not, but lately they have the style of a "scroll" ... 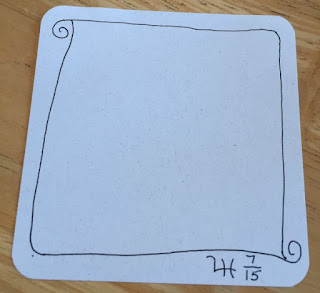 Adding to my "style" are some the various techniques I've recently explored that I'm enjoying incorporating (and hope to perfect as I continue learning).

I've had several ask, "How do you do that?!"  I guess the steps one takes to start, and complete, a tile is part of a "style" as well.
I guess I am a little from column A, a little from column B ... it just depends on how I feel at the time - I've used all of the above!  There ARE no rules, but I decided to take some photos in stages of a tile to show how one MIGHT progress... 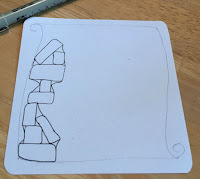 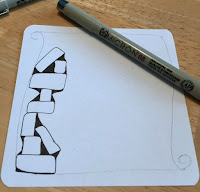 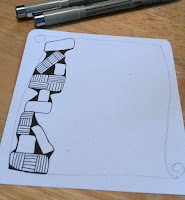 #1 - beginning of a repeated pattern stack
#2 - filling in around the stack
#3 - adding a pattern (Keeko) to the pattern - noter the "stack" has another block added to the height
#4 - the beginning of next pattern (Gnarly) added
#5 - Gnarly added to base of stack; beginning of 3rd pattern, Xplode
#6 - Xplode complete 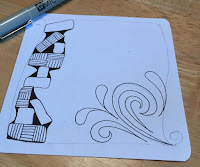 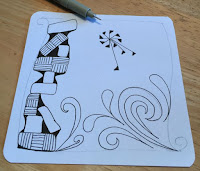 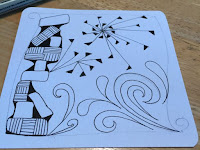 Now it is time for the finishing touches - filling in areas to balance the tile (generally about 1/3 of the tile is "dark"); and shading to add depth ... 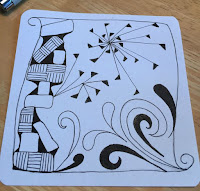 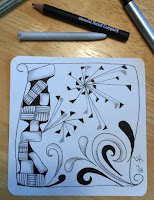 #7 - just part of Gnarley is "blackened"
#8 - shading is added with graphite - note the shadows on Xplode - another new technique tried with this tile ... 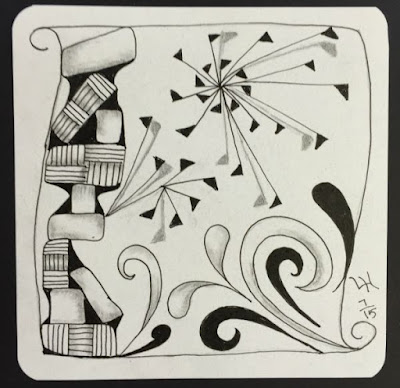 Another piece I'm working on - When is enough, enough?  It's OK to leave some white space:  where and how much? ... Not every tile needs to be completely tangled ... This is a personal choice and a balance.  I think it will depend on the patterns and "needs" of the piece ..... and artist!

Thank you - your comment has been submitted for moderation and will appear shortly...